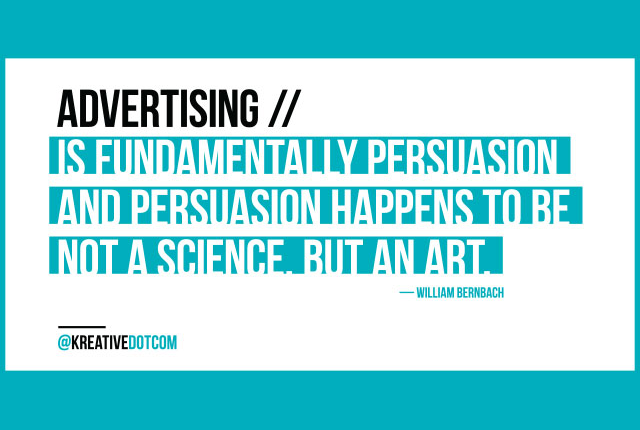 William "Bill" Bernbach was an American advertising creative director, best known for popularizing the method of pairing off art directors and copywriters to enhance and coordinate the creative process.

William Bernbach started his career with a job in the mailroom at Schenley Distillers, where he proactively wrote an ad for Schenley's American Cream Whiskey. It ran, and he was promoted to the advertising department. He entered the advertising industry at the William Weintraub agency. He would later work with Coty, and then Grey Advertising where he started as a copywriter and was promoted to Creative Director.

Bernbach grew frustrated with the continued sameness in process between companies, referring to his peers as technicians and scientists. His frustration stemmed from his perspective that advertising and persuasion were more artistic than scientific. Along with some colleagues from his former employers, he formed his own agency, DDB. Bernbauch himself played an integral role in the operations of the agency, leaving administration and business aspects to his partners.

His legacy was one of creativity and off-beat themes, characterized by simplicity. He was credited for being the first to combine art directors and copywriters into two-person teams, an industry standard today that changed from the old practice of keeping the two disciplines in completely separate departments.

Among his many achievements, Bernbach was inducted into the Copywriter's Hall of Fame in 1964, received the Man of the Year Award of Advertising in 1964 and 1965, and earned The Pulse Inc. Man of the Year Award in 1966. He was called "Top Advertising Agency Executive" in 1969, received the America Academy of Achievement Award in 1976, and was inducted in the American Advertising Federation Hall of Fame in the same year. Among his formal achievements, Bernbach's agency DDB has a lasting pop-culture legacy as an oft-referenced rival to the fictional agency Sterling Cooper on the TV show Mad Men.

William Bernbach is best known for having reintroduced the creative element into what had been a cookie-cutter industry. He realized that collaboration—principally, between the art director and copywriter—was imperative to get the full advantage of a creative and persuasive appeal.

Bernbach said, "Advertising is fundamentally persuasion and persuasion happens to be not a sceince, but an art." And why is it that persuasion is an art, and not a science? Consider the state-of-the-industry at the time: many advertising agencies offering similar services. When all of these agencies are abiding by the same 'scientific' standards, their work is commoditized and similar, regardless of who produced it. In that environment, an artistic lean earns a lot more attention because it stands out.

What do you think about William Bernbach's quote? How much of persuasion is art, and how much science? Join the conversation below or stop by Twitter, Facebook, or Pinterest to discover more inspiring advertising quotes and let us know what you take from this Bernbach quote.