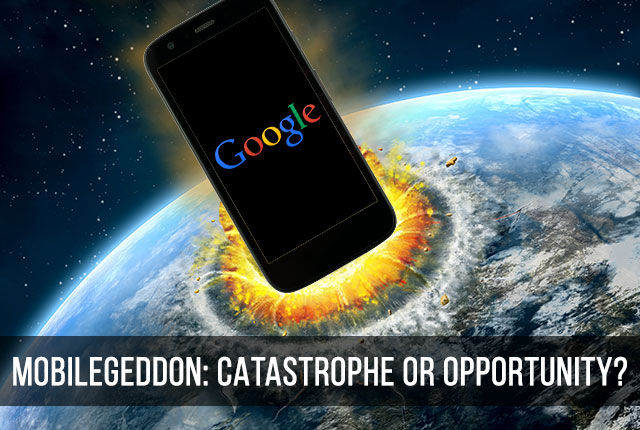 On April 21, 2015, Google released the mobile-friendly algorithm, commonly referred to as the menacing Mobilegeddon (think Armageddon, but for mobile sites). While the update won't affect rankings on tablets or desktop computers, it certainly does affect an estimated 58% of all search queries which are submitted from a mobile device.

Surviving Mobilegeddon means making your site meet all of Google's mobile standards, like using text that's big enough so that visitors don’t need to zoom in or scroll horizontally. Links ought to be clickable from the touch interface, and the layout should by optimized for smartphones.

The Opportunity: Get a Leg Up on the Fortune 500

As of early April, an estimated 46% of Fortune 500 companies and even 29% of the top 500 retail sites still had not been called "mobile friendly" by Google yet, according to Merkle/RKG. A big shuffle in mobile shopping search terms might be in the cards. And the sooner that the smaller online retailers can act to optimize their own sites, the sooner they might actually realize the benefits of ranking higher than some of the largest retailers for the products they sell.

While the name seems menacing, Mobilegeddon is actually a big score for mobile users and savvy businesses alike. Smartphone users, of course, get websites that are easier to read, which also makes them more clear and persuasive for ordering products and arranging services.

And that number of smartphone users is not insignificant to online retailers. Between 2012 and 2014, the overall percentage of shoppers who used mobile devices instead of desktop or tablet rose from 25% to 35%. Notably, 15% of shoppers are decisive or impulse buyers who can discover a product on their mobile device and spend just a couple of minutes before making a purchase.

Let's be real here: Mobilegeddon might be an opportunity for small businesses, and beneficial for mobile users, but the primary reason this initiative was planned was to benefit Google. Google processes an estimated 62% of all searches, worldwide, and Mobilegeddon will tether more mobile websites to the Chrome internet browser and Android operating system. Crucially, this undercuts individual retailer's apps, and offers an alternative: push notifications from websites to the desktop and Android versions of Chrome. Native apps, of course, do harm to Google's ability to track browsing history, which Google uses to craft targeted advertisements.

Do you have questions about how Mobilegeddon could affect your site or niche? Contact Fulfillment Pros today or leave your comments below.