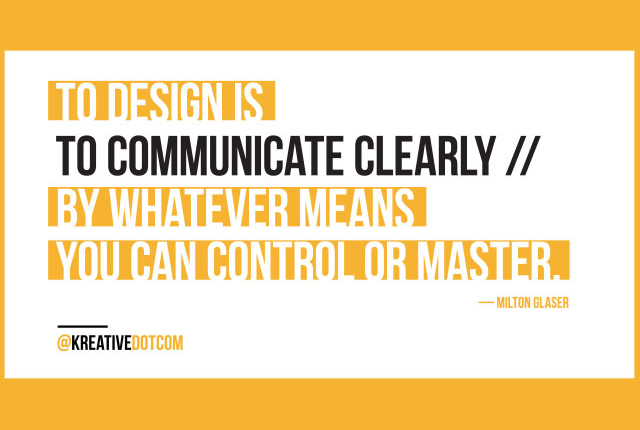 To Communicate Clearly ...
by Team KREATIVE //

Milton Glaser is an American graphic designer and founder of New York Magazine.

Milton Glaser is an accomplished artist and designer from New York City. After studying at Manhattan's High School of Music & Art as well as The Cooper Union, he founded Push Pin Studios, a graphic design and illustration agency, in 1954.

By 1968, he founded New York Magazine where he acted as President and Art Director for nine years. His publication became a model for city magazines, inspiring many imitators. In 1974, he established Milton Glaser Inc. in Manhattan, a design firm that still produces in a wide range of disciplines. And in 1983, he took his consulting back to the publications world when he founded WBMG with Walter Bernard. A publication design firm, WBMG has worked with companies all around the world and some of the most influential publications in print, such as The Los Angeles Times, The Boston Globe, PC Magazine, and ESPN, the Magazine.

Glaser's work has been featured in exhibits worldwide, including at the Centre Georges Pompidou in Paris, and the Museum of Modern Art in New York. In 2004, Glaser won a National Design Award Lifetime Achievement from the Cooper-Hewitt National Design Museum. And in 2009, he was awarded the National Medal of Arts by President Barack Obama.

Glaser's design practices reflect both a breadth of knowledge and a richness of depth. He became a trailblazer and sought-after adviser in the world of publication. And while his eponymous agency works in the typical brochure and logo design, it has also gone in-depth with clients and advised on features like architecture and packaging. He is similarly accomplished as an artist, featuring work in popular art museums.

Over each of these media, Glaser has meaningfully communicated with his audience, and sometimes in unconventional ways. Publication formatting is perhaps a prime example: where others may have been more concerned with individual graphics and copy, Glaser had an interest in the overall presentation. Glaser said, "To design is to communicate clearly by whatever means you can control or master." Glaser recognized that he could control and master this aspect of publication. His readers, imitators and, later, his own clients reinforced the efficacy of his perspective.

As a call-to-action, consider this revision: The more you can control or master, the more clearly you will be able to communicate.

What do you think about Milton Glaser's quote? How does it impact your messaging or business? Join the conversation below or stop by Twitter, Facebook, or Pinterest to discover more inspiring communication quotes and let us know what you take from this Glaser quote.